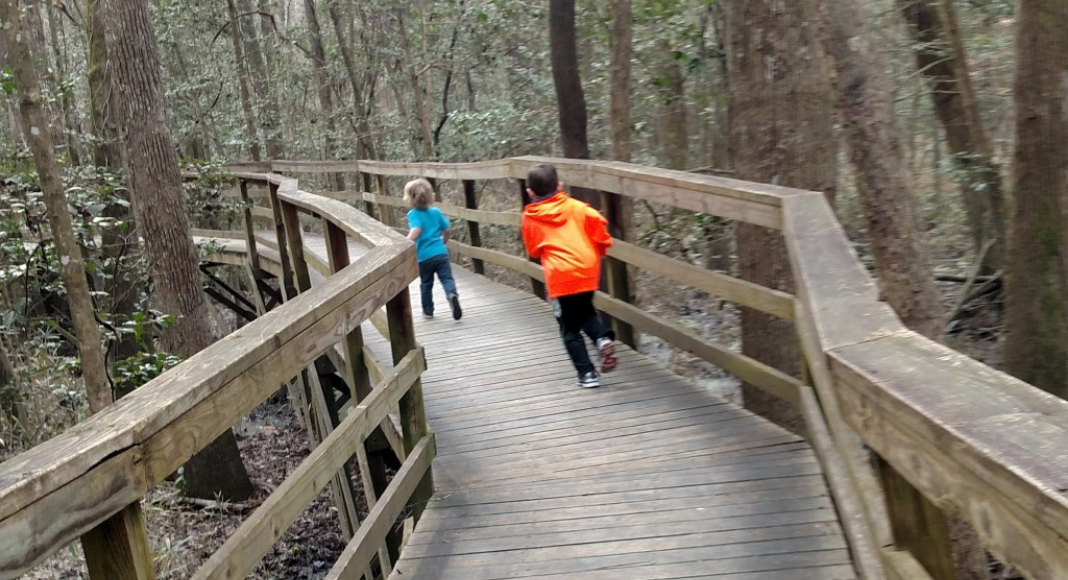 I’ve been meaning to take my kids out to Congaree Swamp since last summer, but it seemed so far away from where we live in Lexington. But after trekking out to the Timmerman Trail, I realized it is only one exit up from that, which isn’t far at all.

My kids, ages six, four, and nearly three were really excited to go to The Swamp. They hoped for ogres (thank you Shrek), mud, and general mayhem. We did not find any ogres, but a good time was had by all.

We did the boardwalk loop, which is about 2.4 miles of very easy board-walked trail. It is stroller accessible and an easy walk for even the smallest hikers. We saw cypress knees, the evidence of a plentiful bug population (apparently beetles and woodpeckers pepper dead logs with holes), and assorted fungi.

What Made This Hike Awesome

Bathrooms. Any mom can appreciate these, especially with potty-training kids. And they aren’t just port-a-potties either. We’re talking real, working, flushing toilets. I think this may be the first hike we’ve done that has bathrooms on site.

The Welcome Center is a mini-museum. It has several exhibits, things the kids can touch and learn about, as well as a small gift shop. We stopped in there after our hike and spent another half an hour or so. It would have been longer, but mama was hungry for lunch.

It is a great asset to the community. You will definitely want to come back. In the summer there is a synchronized firefly dance. I don’t know how they do that, but I want to watch.

The experience is free. Unless you plan on camping or buying drinks at the visitor center, expect to walk away with your pockets no lighter. In fact, they may be heavier, if you end up carrying your kids’ rock collection.

Park Rangers. These guys are awesome and great with kids. They do Ranger-led hikes and if you have older kids who can focus and go at a steady pace, it can make for a great afternoon. (My younger kids tend to run, then dawdle, then run again. Not the best audience).

After we completed our hike, my 6-year-old tracked a ranger down, named Steve, and he happily chatted my kid up for several minutes about the fungus he found on the trail. Steve even helped him tie his shoes.

Just a Head’s Up

This is a swamp. There is water. Standing water. In warmer (or hotter, as the case may be) weather, this is the perfect buggy environment. You will want to bring bug spray. We went while it was still fairly cool, and there weren’t any biting insects that we noticed. There is also poison ivy close to the trail. The rangers will point it out, and it’s a great opportunity to familiarize your kids with how it looks and grows so they know to avoid it in the future.

It probably won’t be a quick visit. All in all, we were there nearly three hours. We could easily have spent at least an hour more. Pack accordingly with plenty of water (though the visitor center does have a bottle filler! nifty!) and snacks for the kids.

This is a pet-friendly trail. Feel free to bring your leashed pets. Do expect to see other dogs along the trail.

There are non-board walked trails for the more adventurous and stroller free. I think they are still considered easy level – that is, not strenuous.

If you haven’t yet checked out all the swamp has to offer, you really should. It may not have ogres, but it’s packed with memory-making potential.

If you’ve visited the Congaree Swamp and National Park, what would you add to the list? 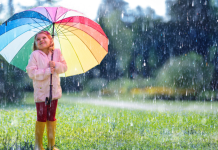 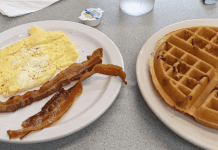 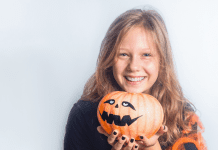