Jack and the Giants

An event every week that begins at 3:00 pm on Saturday, repeating until December 4, 2021

An event every week that begins at 3:00 pm on Saturday, repeating until December 4, 2021

An event every month that begins at 10:00 am on day Third of the month, repeating until December 4, 2021 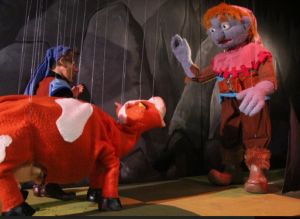 Giants are supposed to be big, mean, and nasty. They eat anyone who crosses their path. But Flinch isn’t like other giants. He’s constantly picked on by his bigger brothers for being sweet, caring, and… a vegetarian! When he sneaks away from his home in the mountaintops to the valley below, he befriends a poor young boy named Jack. Soon he’s found a new home, but his bigger brothers won’t let him go that easily.

CMT’s production is a twist on the classic story of Jack and the Beanstalk. Featuring some of our largest puppets, this show is also big on heart!