For most people, this is simply the day after Valentine’s day. A day to buy cheap chocolate that’s been deeply discounted to make room for St. Patrick’s Day and Easter candy. But February 15, 2013, for my family and me, became the day I was bitten by a wolf…

Whoever I and my family were before my doctor confirmed with his words—what I’d known for years but hoped like hell to be wrong about—changed the trajectory of our lives forever.

I tried to prepare myself for the words. I listened attentively as he announced, “Vickey. You tested positive for A.N.A or antinuclear antibodies. That, along with the other symptoms, and your response to the prednisone…it’s lupus.”

I’d already felt the teeth of the wolf pierce my skin, shatter my bones; leaving my body so tired and maimed I didn’t know how I was still standing. But what I didn’t realize was that I’d also been gifted with a life-long companion to guide and comfort me through this next leg of my journey. I acknowledged the bite and the diagnosis. I won’t lie, I cried every night for at least the first six months. But only in the shower, where no one could hear or see me breaking.

A Brief Summary of Lupus

Lupus is a chronic (long-term) disease that can cause inflammation and pain in any part of your body. It’s an autoimmune disease, which means that your immune system — the body system that usually fights infections — attacks healthy tissue instead.

The word ‘lupus’ is Latin for ‘wolf’, as noted on the Lupus Foundation of America’s website,  “…the thirteenth-century physician Rogerius who used it [lupus] to describe erosive facial lesions that were reminiscent of a wolf’s bite.”

Later those facial lesions would be described as the ‘butterfly rash,’ and for this reason, many people associate the butterfly with lupus. That’s fine for those who would define their illness by the beautiful winged insects. However, the original animal associated with lupus is how I choose to identify with this disease.

I’d be remiss if I didn’t share this tidbit of weirdness. I don’t really remember the first year and a half of my life after being diagnosed with lupus. I thought I’d jot down what I do remember after my initial encounter with the wolf. 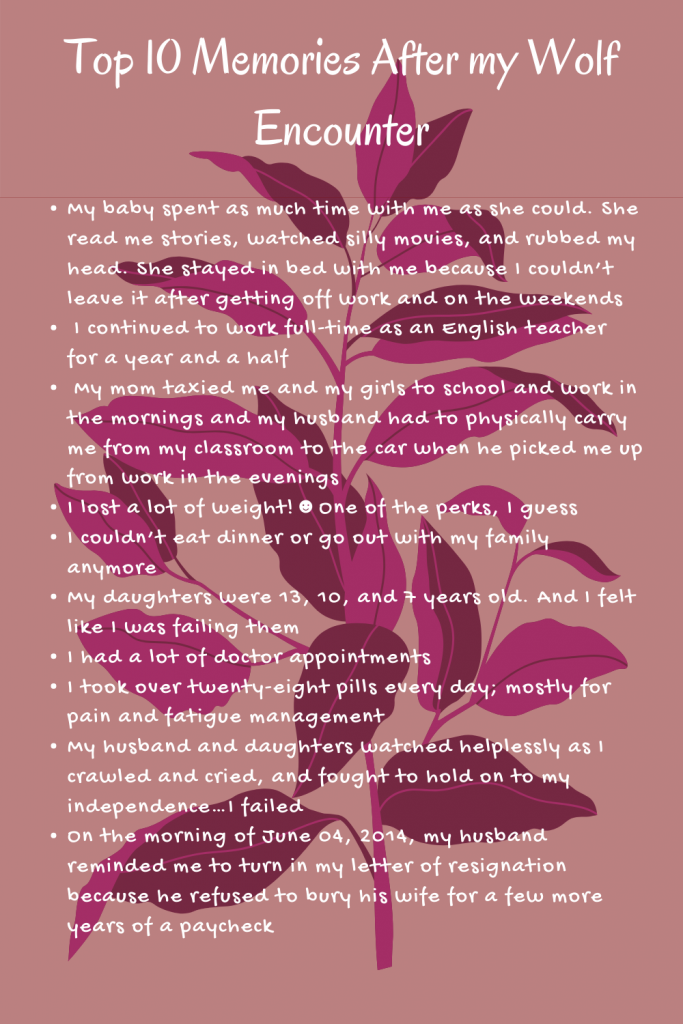 That’s what I recall, but everyone else remembers that year and a half or so in vibrant technicolor. Vivid nightmares and flashbacks of fear and doubting.

I still catch my husband staring at me sometimes when he thinks I’m not looking. Like he can’t believe I’m the same woman he had to physically carry up the stairs to undress, bathe, and dress for bed at the end of our workday. Like he’s seeing a holographic version of his former wife draped over a new, more determined, and self-aware model.

I’m not sure if he likes the new or old me better, but he tells me how much happier and centered I seem. That has to count for something, right?

Understanding the Bite of the Wolf

I have always had a fascination with wolves. The wolves that have always garnered my attention are majestic, often misunderstood Canis lupus. The wolf is a symbol of freedom, wildness, strength, bravery, fierceness, and intelligence. They are also known as loyal, protective, nurturing, and autonomous.

In many ways, being diagnosed with lupus is what started me on the path to reclaiming myself.

Once I left my career, all of those work friends and even some of my family members were no longer a part of my life. They were all moving on and I was learning how to live in this new kind of normal. After receiving the bite of the wolf, I understood two important lifestyle changes I had to make if I was going to not only survive the bite but thrive with it.

I needed to find my new pack or at least be open to becoming a part of one. Thank all of my good Karma for a chance meeting with Hetlena Johnson. I met her the first year after leaving my career, and she is one of the most positive and dynamic women I know. We clicked like puzzle pieces. Before I knew what was happening, I was working with her lupus nonprofit organizing a lupus fundraising gala! It kept me occupied and helped to meet the most beautiful she-wolves who were all surviving their own encounters with the wolf.

As much as wolves love the company of their pack mates, they also enjoy some solitary time to run free and get to know themselves outside the safety and security of their pack.

I had to learn how to be alone with my thoughts and not drown in them. It was hard at first because I was so used to being everyone’s favorite teacher. Not having to think about what and when things would get done because I had eight bells a day to tell me when to work, eat, rest… I spun out for a while when left to my own devices.

Eventually, I learned to enjoy my own company as well as the importance of protecting my mental, spiritual, and physical sanctuary. I didn’t realize I had a right to do that until after receiving the bite of the wolf.

I had no choice but to leave my career, acquaintances who couldn’t find the time, and even family members who were too uncomfortable with my illness behind to figure out who this new version of Vickey could be. Although I don’t remember much from the early days after being bitten, I was obviously learning something. Growing into someone worthy to carry the bite of the wolf.

After being home for a year or so, my health began to improve. Although there is no cure for lupus and periods of remission don’t really exist. I’m glad to note that medical advancement and lifestyle changes can help manage the symptoms of this disease.

Lupus is a 24/7—365 day companion. It has no qualms about inviting other autoimmune diseases/disorders to come and hang out in your body. It’s kind of the gateway autoimmune disease. In the seven years since being diagnosed, I’ve also been diagnosed with the following disorders.

As a lupus warrior, there is never a day when my body doesn’t attack itself. There is never a time when I’m not in excruciating pain. I could sleep all day and all night and still have absolutely no energy. Activities that used to take me thirty minutes might take me a week to complete now. I used to be able to write twenty-page research essays in forty-eight hours. Now it takes me forever to process the information enough to use it in my writing.

When people ask me what’s it like to have lupus, this is my response:

Have you ever had the flu or mono? They usually say yes. Then I ask them if they remember how they felt on the worst day of their illness. They answer in the affirmative—most of them folding into themselves remember the pain—before saying something like, “If that’s how lupus feels, I’m sorry because that was awful!”

Most people’s minds can’t fathom being in that much pain on a temporary basis but living with that level of pain for the duration of one’s life, is beyond comprehension. And yet, over five million people worldwide do just that.

How can a person with lupus have a good quality of life?

Accepting the bite of the wolf

I accredit the bite of the wolf with my rather fabulous quality of life. It wasn’t enough to simply acknowledge and understand the diagnosis of lupus and/or the bite of the wolf. I had to finally accept them. Accept that my physical body is being ravaged by antibodies it creates to destroy itself. Then, I had to accept that my spirit was gifted to have a connection with the wolf.

I choose to identify with the wolf because embodying the spirit of the wolf is the only way to deal with the certainty that my body will not survive the reality of system lupus erythematosus. I choose to accept the bite of the wolf because, with it, I’m emboldened to go after what I want without fear of failure or loss of respect or relationships.

Lupus has taught me several lessons and the bite of the wolf endows me with enough self-awareness to use my newly acquired knowledge to make wiser, more informed choices for myself. The bite of the wolf has delivered me from the incessant need to please others, apologize for my thoughts and actions, and justify my life.

Living with lupus does not afford me to live a passive lifestyle. I embody the spirit of the wolf and use it to carve out the kind of life I deserve. I refuse to lament the day I received the bite of the wolf. February 15, 2013, was the first day I realized I’m more wolf than a woman on most days and I refuse to apologize for my wildness.

Are you or someone you know living with lupus? What lessons has lupus taught you? 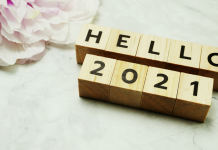 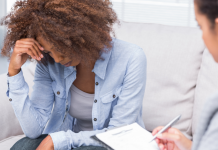 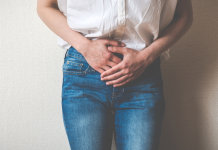