Before you had kids, were there things you swore you would never do once you became a mother? You’re not alone! In our series “I Never Thought I’d Become THAT Mom,” we’re sharing our “can’t believe” moments as we reflect on motherhood.

From the time I was a little girl, I knew I wanted to be a mom, and I assumed that it would happen as soon as I grew up and got married. That was how it worked in the storybooks, right? But college came and went, and there was no ring on my finger. So I decided to pursue my education in a field – teaching – that would be family-friendly when the time came.

Grad school came, and went, and there was still no ring on my finger. So I threw myself into my career and made the most of my singleness by teaching, traveling, seeing the world and loving on the students God sent my way. Finally, I came to Columbia to attend seminary at Columbia International University. I came to learn about God, but in the back of my mind was the thought that maybe, here, I would meet someone special.

It almost didn’t happen. But in my last year, in my last semester, I crossed paths with my future husband. While my seminary years came and went with no ring on my finger, I did graduate with the hope that marriage and motherhood would not be far in my future.

When we married three years later, I was 32 years old. It made sense to wait a couple of years before starting our family, but the choice to wait eventually stretched into a monthly roller coaster of hope and despair, watching family and friends conceive again and again while we were left at the starting line.

Until … one morning, there were two pink lines on a pregnancy test. I became a mom for the first time at the age of thirty-seven and was head over heels in love with the little girl God placed in our family. I loved being a mom and was looking forward to growing our family – sooner rather than later, given my “advanced maternal age” status.

But bringing another baby home took longer than I expected. The road took us through the death of our unborn daughter Naomi, two more miscarriages, and a whole year of nothing before I saw those two pink lines again. After an anxious “pregnancy after loss,” we welcomed our son into our family. I was 41 years old.

Today, I am 44 and doing my best to keep up with my six-year-old daughter and two-year-old son. Friends my age are dealing with teenage angst, paying for college, or in a few cases, becoming grandparents. I am teaching phonics and potty-training … and loving it. I never dreamed when I was a girl that motherhood would elude me for so long and I would be the “older mom” someday. But today, I wouldn’t choose any other life.

Did it take longer than you thought to be a mom? Tell us about it! 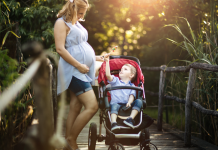 5 Tips for Surviving Pregnancy With a Toddler at Home 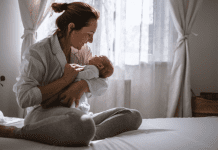