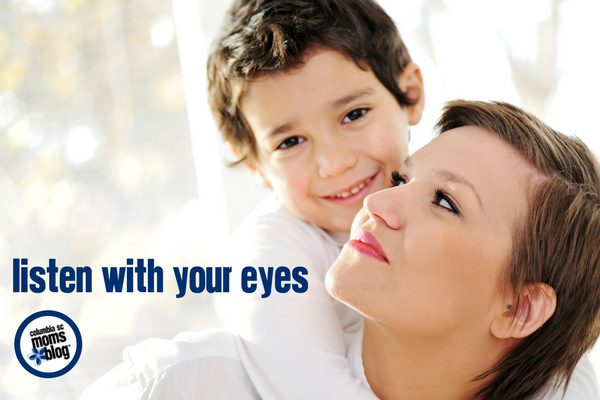 It was a normal, crazy moment in a normal, crazy day. It was afternoon, and my mind was on the dinner I hadn’t planned yet and the baths that needed to be done. I was also trying to steal a second for myself to finish reading an email or responding to a message or something else that seemed quite urgent. Oblivious of my plans, my five-year-old son came up to my side to ask me something, his voice loud and insistent.

“Mmm-hmm,” I answered, eyes on the computer screen. I glanced his way quickly, then back to the screen, eminent multitasker that I am. “What’s up, bud?”

“I’m listening, sweetie,” I insisted, moving the cursor across the screen. “Whatcha need?”

“Mommy, listen with your eyes!”

I stopped and turned and for the first time, gave him my full attention and let him share what was on his heart.

His words stayed with me the rest of the day. How often was I distracted when one of my children needed me? Or my husband? Or a friend? Whether it was a screen or a chore or my own thoughts, how many times had I split my attention between a task and listening, and ended up doing neither one well?

Did you know that the whole idea of multitasking is a myth? According to this article, our brains aren’t really capable of focusing on two or more things at the same time, especially when those tasks both use the same part of the brain. We’ve just adept at switching from one task to another very, very quickly. And that can make us feel overwhelmed.

That feeling of being overwhelmed is a familiar one to me. I feel it often when both of my children need me at the same time, or when I’m cooking dinner and trying to get the chicken done at the same time as the vegetables. I felt it in that moment with my son when his tugging and calling interfered with the e-mail I was trying to write. The amazing thing is, once I focused on him, fully, it lifted. I was still impatient to get my other task done, but the crazy feeling of being pulled in two directions was gone, if even for that moment. And once he was satisfied that he had been heard, I was able to get my other task done, too.

Have you ever wondered why we have two eyes? It’s not to see two different things at the same time, as time-saving as that may seem to be. It’s to see one thing well. Having two eyes helps us see the same thing from two different angles, which is what gives us depth perception. When one eye wanders and looks in a different direction, neither one sees clearly.

In the weeks since that moment, I’ve been more aware of the times when I’ve been so distracted by one task that I’ve not been fully present for another. I’ve been lost in my thoughts while driving and suddenly found I’ve driven halfway to my destination but can’t remember anything I saw along the way. I haven’t even solved the problem in my head either. Or when I’ve been on the phone with my husband and answering an email at the same time. I am scrambling to figure out what he was talking about because I missed the last ninety seconds completely.

One of my heroes is Jim Eliot. He was a missionary to Ecuador who, along with four other men, was killed in the 1950’s by some the people with whom they were trying to share God’s love. Jim’s wife Elisabeth preserved his journals and other writings, and one of his quotes challenges me. “Wherever you are,” he wrote to his wife once during their long-distance courting years, “be all there! Live to the hilt every situation you believe to be the will of God.” If in the pre-cell phone days, it was easy to be distracted and not fully present, how much more so today when we carry our distractions with us in our back pockets or purses?

I know it’s July and not January, but I have a summer resolution this year – to be all there. To multitask less, and focus more. To turn the distractions off, tackle one thing at a time, and do it well. I will use my two eyes to see my children fully, in three dimensions, and to hear them clearly.

To listen with my eyes. 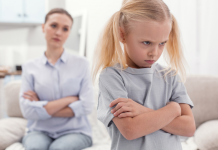 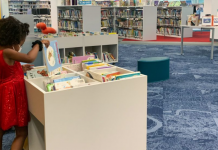 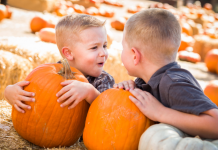